Impact of pressure on plastic yield in amorphous silica

For the plastic flow of silicate glasses, the coupling between pressure and shear is still a debated issue. The problem is especially acute for amorphous silica, which is prone to densification due to large free volume. Here we have used Molecular Dynamics simulations of a model iono-covalent amorphous solid with large free volume to investigate this coupling. Of course this model tries to emulate amorphous silica. 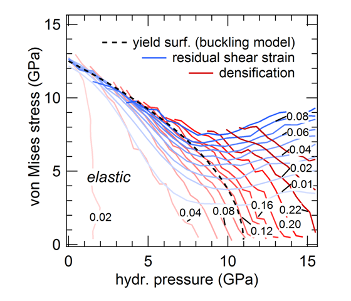 The most interesting result is the shape of the yield surface : the MD simulations result in a quasi parabolic yield surface (Figure). This is not too far from the elliptic shape we assumed for our previous constitutive equation (Kermouche et al. Acta Mat. 2008). The main discrepency lies near the pure shear regime, which is experimentally difficult to access. Remarkably, this parabolic shape has been predicted by Lambropoulos (J. Am. Ceram. Soc 1993) a number of years ago, based on a simple buckling model. Therefore, the idea that buckling is key to the anomalous mechanical properties of amorphous silica pervades the plastic response as well. The major remaining question is when do shear bands appear in amorphous silicates, and how can we deal with them at the continuum scale ?